"Why are they always white children?" 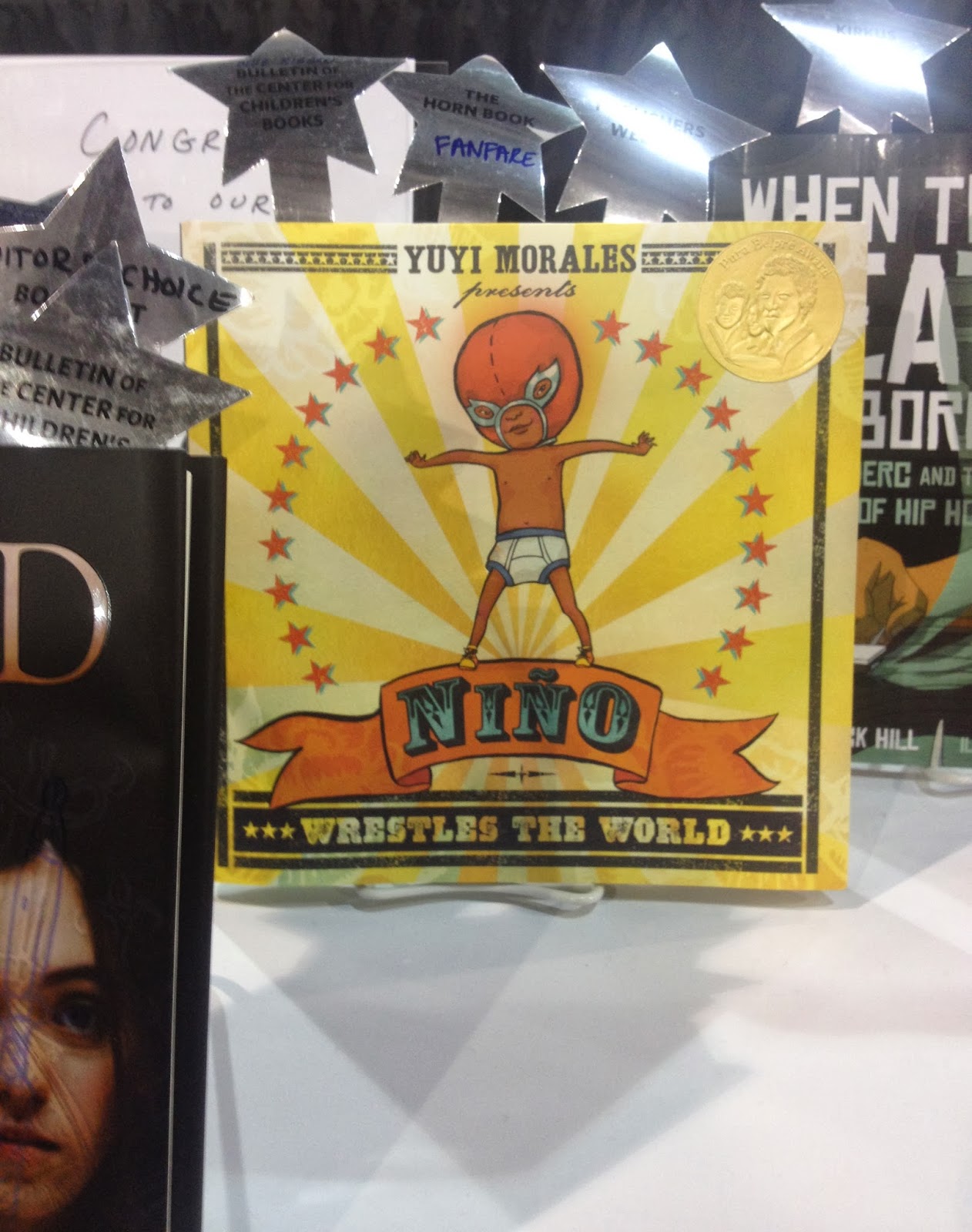 Many of you will recognize the title as the question asked by a five-year-old Black child at the beginning of Nancy Larrick's 1965 article, “The All-White World of Children’s Books.” While Larrick addressed other populations, she wrote her article primarily about the state of publishing for Black children. The term “Hispanic” hadn’t come on the scene yet, much less the word “Latino.”1 In 1965, we were all still thought of as “Spanish.” Perhaps at times we were lumped into the categories of Puerto Rican or Mexican, depending on where in the country you lived and which cultural group non-Latinos were exposed to. The U.S. Census didn’t even recognize us, making no real concerted effort at keeping statistics on Hispanics until 1980.

According the 2012 Census Population Estimates, there are 53 million Hispanics in the United States. This is 17% of the nation’s total population. Hispanics made up almost half of the entire population growth in the U.S. between July 2011 and July 2012. As of 2009, there were 16 million Hispanic children in the United States. That’s 22%, almost a quarter, of all children in the U.S.2 Last June, in light of these numbers, NPR aired a story titled “As Demographics Shift, Kids' Books Stay Stubbornly White."

I can do easy math. That’s forty-eight years between these two stories. We have to imagine that the demographics have changed significantly in the time period between these two stories, right? Yet, in forty-eight years not a whole lot has changed. It’s like deja vu all over again. Same story, different title. Do Latinos even make up 17% of the characters in children’s books? In any books published in the United States, period? How can we be millions and growing and be practically invisible in all forms of media, including books?

This past year I had the opportunity to serve on the 2014 Pura Belpré Award Committee. To say that it was the greatest honor of my professional career and up there with the most rewarding experiences of my life is an understatement. I can’t express how much the entire experience meant to me. To honor writers and illustrators who are putting our faces, our kids, into books is special. Books matter. Rudine Sims Bishop3 said it best when she compared the experience of reading to looking through a window, stepping through a sliding glass door or looking into a mirror. We look to books to take us to new places, to meet new people, to have new experiences. Yes. But we also look to books to find ourselves. To see yourself, your life experience, a face or name like yours in a book means something. I’m an adult who didn’t experience this as a child, and I still get goosebumps when I see a character that resembles me in a book. It legitimizes your place wherever you are. If you don’t understand this, if you can’t empathize with someone’s need for this sense of recognition, it’s because you have the privilege to not understand or care.

This issue isn’t just about us and our children, it’s about you and your children too. As Professor Bishop wrote, “Children from dominant social groups have always found their mirrors in books, but they, too, have suffered from the lack of availability of books about others. They need the books as windows into reality, not just on imaginary worlds. They need books that will help them understand the multicultural nature of the world we live in, and their place as a member of just one group, as well as their connections to all other humans.”4 Despite the diversity of the United States there are many pockets of this country in which populations continue to be segregated with little exposure to anyone not of their own racial or cultural background. Children living in one of the most diverse countries in the world need to be exposed to people who are not like them. Otherwise they grow up to be the kind of person that freaks out when Coca Cola airs a commercial during the Super Bowl in which “America the Beautiful” is sung in languages other than English.5 ¡Qué horror!

Lest you think I’m exaggerating about the lack of children’s books by and about Latinos (after all, Dora the Explorer is still all over the place, right) consider this. Last year, Lee and Low, publishers of multicultural books for children and young adults, created an infographic using publishing information gathered by the Cooperative Children’s Book Center of the University of Wisconsin’s School of Education.6 In the image we see eighteen years of children’s books by and / or about people of color.7 Sometimes it takes a picture to really break it down for you. That’s what this image does. They might as well have created it using a cardiac monitor. It looks like the publishing of children’s books by and about Latinos has flat-lined. Dead. Ten percent of children’s books published since 1994 contain “multicultural content.” This doesn’t even tell us what percentage of that (1) contained content about Latinos, (2) contained accurate content about Latinos, or (3) if the Latino content was a significant part of a book.

So, the questions remain, how do we change this? What can we do? Obviously, it’s a problem that is multifaceted and larger than any one person or group. There are two big issues we face: (1) How do we increase the number of children’s books by and about Latinos in publication and circulation? (2) How do we give more exposure to the many wonderful books that exist? I’m going to attempt to address as many players as possible here. Come on, people! It takes a village to help Latino children’s books come to life and thrive!

Publishers: If you have a book by a Latino in your catalog and you are attending the biggest librarian conference in all the land, bring copies and come ready to sell it. Sell it like you would the next great dystopian YA novel. You know, the one you brought boxes of? Also, if you have one Latino author or illustrator (because that’s about all most publishers have) chances are good that the title will be considered for the Pura Belpré Award. If that’s the case, then come to Midwinter prepared. Have your Belpré medal stickers...just in case! Have copies of the book to display and to sell. Be ready and willing to celebrate that book if it happens to win a Belpré just as you would if you had a Newbery or Caldecott winner. The Belpré Award is just as significant an honor. Don’t let it fall off your radar! Send books that meet the criteria to the committee for consideration! Keep our award-winners in print!

On a different note, when Latino writers and illustrators submit manuscripts for publication consideration and they don’t stand up to your requirements, needs, tastes, please take the time to tell them why not. I know this is a lot to ask of a company that has a handful of editors and receives hundreds (thousands?) of manuscripts a year, but if you recognize the need for more accurate multicultural books and you care about being an ally, an occasional response would be helpful. When you do publish books that feature Latinos, please publish books that are accurate and well-written, that don't stereotype and that show the great diversity of our cultures.

Education administrators and policy makers: Please don’t kill our school libraries! Our children, all of our children, need them. For some children, the school library is their only exposure to libraries. We are not all fortunate enough to grow up in a household in which reading and books are celebrated and encouraged. We need our school librarians. Also, if we’re going to live and die by the Common Core, make it inclusive of literature by and about many different cultures and racial groups.

Librarians: Librarianship is still predominantly a white female profession. We don’t expect you to necessarily understand our experiences. However, as proponents of the freedom to read and of diverse views, we do expect you to open your mind. Push beyond your comfort zone and your scope of knowledge and experience. Seek out and promote books that recognize all of us. Analyze books for accuracy and, when needed, seek out the help of individuals who are knowledgeable of ethnic and racial groups so that you are promoting the best the publishing world has to offer. Promote books about children of all racial and ethnic groups year-round, not just on the designated celebratory “month.”8

Teachers of art and writing: Promote writing and illustrating for children’s books as a career possibility to your Latino students. It might not ever dawn on them that this is an option. Put it out there so that we can begin to cultivate a new generation of writers and illustrators.

Latino writers and illustrators: Write what you know, but also stay connected to the interests and needs of children today. We need more books about all kinds of topics, about Latino kids living all kinds of experiences.

The New York Times and other media: Follow up. While we appreciate the occasional story on the lack of diverse children's books, we need more than that. If you write a story about the dearth of children’s books by and about Latinos9 don’t then completely neglect to mention the Belpré Award winners in an article about the Newbery Award, an article in which you only mention three other ALA Youth Media Awards, none of them being those that celebrate diversity.10 This year the Pura Belpré Award committee honored seven books written by and about Latinos. That's seven books to review and promote! Seven authors and illustrators to interview and feature in your pages!

Look at any newspaper or online news Website these days and it seems that the more diverse our society becomes, the more we pedal backwards in our acceptance of differences. We cling to our uninformed beliefs about people. We view anyone we don’t have contact with or knowledge of beyond distorted media representations as not being real. Just look at the controversy over racist mascots. Is this the kind of future we want our children to grow up into?

If the emotional appeal doesn’t work, then how about more statistics? People like statistics. Statistics offer concrete proof and support for arguments. They tell us where to put our money, how to invest, who to woo. How’s this for a statistic: The Census projects that by 2060 there will be 128.8 million Hispanics in the United States. This group will make up 31% of the total population. That’s about a third of the population. We’ll be in your schools and in your neighborhoods even more than we are now. We’ll be in parts of this country no one ever imagined Latinos would be found. And, for those who worship the almighty dollar, we’ll be a third of your consumer power.