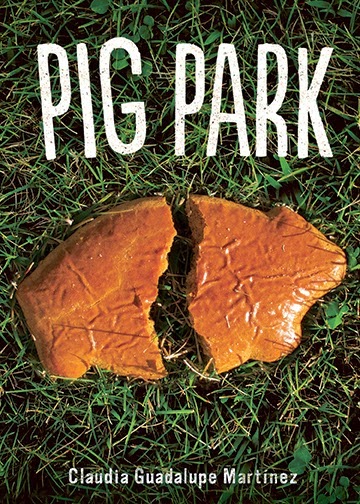 I confess. I'm a glutton. This book had me at the cover. That image of a delicious marranito? I can imagine the moist cake-like center, the smell of molasses. I love this cover. I want to eat this cover.

Between those yummy covers is an equally delicious book. Pig Park (Cinco Puntos Press, 2014) is Claudia Guadalupe Martinez's second novel following her 2011 debut, The Smell of Old Lady Perfume, also published by Cinco Puntos. Masi Burciaga's Chicago neighborhood has become a virtual ghost town since the American Lard Company packed up and moved its business overseas. The lard company was such a central part of the area's economy and livelihood that the neighborhood park got the name Pig Park because of it. When Jorge Peregrino, the one person in the neighborhood who seems to still be doing well for himself, comes to the people of Pig Park with what sounds like a far-out idea to keep the neighborhood alive--building a pyramid that will attract tourist--Masi and her friend jump on board to help. Masi figures even if they can't save the neighborhood she can at least spend her last summer outdoors hanging out with her friends instead of working in the stifling heat of her family's bakery.

I admit, at first I was like huh? Wait, what's going on here? How is no one skeptical of this pyramid idea? What are you Pig Park people doing?! But everything falls into place as you read your way through Masi's story. As the plan unfolds the reader can't help asking a number of timely and relevant questions. What causes neighborhoods to decline? How can declining neighborhoods be revitalized? What happens to local economies when large companies move overseas? Early in the novel the story of "The Devil and Daniel Webster" is referenced, and the novel tackles that age-old question of how far, how much, what exactly would you do for something that matters to you? The Pig Park residents are faced with two significant issues. How far are they willing to go to save their home, and how important is it to maintain the cultural integrity of their neighborhood?

But it's not all about the struggle to revive a neighborhood. An attractive and mysterious young college student blows into town to help the residents with their revitalization plans, and Masi can't help being drawn to him. On the home front, Masi struggles to understand the growing tension in the relationship between her parents. This storyline ties in nicely with the neighborhood revitalization plot as it also addresses the importance of being able to change and evolve in order to survive.

This would be a great book to tie in with social studies units on neighborhood studies, learning about how outsourcing affects cities, and community activism. I love Claudia's use of simile and especially enjoyed the very detailed scene in which a few of the teens make capirotada. Mmm mmm.
Posted by All Brown All Around at 10:56 PM