Post a comment here or on the review of Malin Alegria's Crossing the Line for a chance to win a copy of the book! Deadline to post is Sunday, June 3! 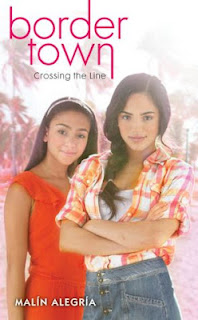 Posted by All Brown All Around at 11:41 AM No comments:

In an interview with NPR, Malin Alegria described her new teen series, Border Town, as being like Sweet Valley High, "but with brown kids." Depending on your view of Sweet Valley High and other books in that particular genre, one might be a little hesitant to get excited. Formulaic plots? Cheesy writing? Kinda lame high school drama? One dimensional characters? Ehhh. Do we really need more of that? The teen romance series has gone of the way of the dinosaur for a reason, yes? 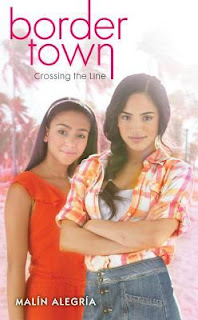 Fortunately, there's a lot to like about Crossing the Line. The protagonist, Fabiola Garza, isn't your typical teen series character. She's not one of the cool kids. She's kind of awkward, but isn't bothered by fact that she doesn't really fit in with any particular group at school. She actually, gasp, seems pretty content with who she is! After describing the many cliques that exist at school to her younger sister Alexis, who is about to start high school, Alexis asks Fabi the loaded high school question: "What are you?" To which Fabi responds: "I guess I'm normal." Nothing wrong with that!

Throughout the novel Fabi contends with her younger sister's growing popularity as she finds a place for herself among the popular kids, a mean girl bully, and the mysterious attacks on undocumented workers, including one of the employees at her family's restaurant. Is there romance? There is a boy, but for now they're just friends. Which is a refreshing change from so many books and movies for teens where the existence of a romance seems to be a requirement.

Crossing the Line has its moments of teen angst in the form of conflict between Fabi and her younger sister who is in love with a popular football player, and Fabi's occasional bullying at the hands of Melodee. But it is also full of humor as seen in the funny opening scene in which Fabi attempts to by a box of tampons on the down-low, but realizes it's a nearly impossible feat in a town where everyone knows everyone. Lest we think it's all fun and games, the storyline in which a group of teens is attacking and robbing undocumented workers sheds light on the anti-immigrant sentiments currently seen around the country.

Unlike the Sweet Valley High books, the story lines aren't flat, the characters are multi-dimensional, and conflicts don't come off feeling contrived and formulaic. The only character who seems to be a sort of stereotype and perhaps around for the sake of additional conflict is Melodee, the popular (white?) girl who once dated the football player Alexis is interested in and who bullies Fabi. I also have a bit of an issue with the cover featuring two very similar-looking thin girls since the description in the book of the sisters is one of opposites. Alexis is described as having "light-colored skin and petite figure" while Fabi has "strong indigenous features and thick frame." Hmmm. The issue of misrepresentation in book covers is an ongoing one.

I'm curious about the fresas, the rich kids from Mexico. Is there conflict between Mexican-American kids and fresas? I would also be interested in knowing what kind of reception this (and the rest of the series) gets from teens who live in border towns. The text is peppered with Spanish words, but no worries, the terms are explained in a "Tex-Mex for Beginners" glossary at the end of the book.

This would make a great summer read. The next book in the series is due out in early July. Can't wait!
Posted by All Brown All Around at 11:37 AM 3 comments:

Last fall I posted the link to an interview with YA author Malin Alegria in which her new teen series Border Town was mentioned. Having grown up reading teen romance series from Sweet Valley High to Couples to The Girls of Canby Hall (seriously, I read them all) I was excited about this new series that Alegria described as being like SVH with brown kids. I pre-ordered the first book in the series, and while I waited for it to come in I thought I'd revisit my youth and read some Sweet Valley High.

While we can assume that Penny Ayala, one of Elizabeth Wakefield's newspaper pals, is either Latina or bicultural based on her last name (I'd have to read the series from the beginning to find out if her ethnicity is ever mentioned--summer project?) it isn't until book #42, Caught in the Middle, that a Latino character is prominently featured. Finally, some representation in the curiously all-white California world of the Wakefield twins! 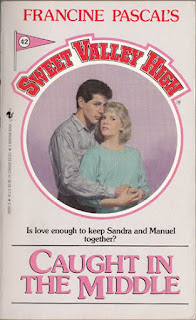 In Caught in the Middle, popular (though secondary character in the series) cheerleader Sandra Bacon has met the boy of her dreams. The only problem is...he's MEXICAN! Say it ain't so!

Throughout the book (written by Kate Williams) we are reminded of just how different Sandy and Manny are. Manny and his family are: ______________ fill in the blank with whatever stereotype about Mexicans you can think of. Okay, I'm exaggerating. There's that scene when the couple goes to the Dairi Burger and Manuel mentions that he happens to know the burger is the specialty of the house. I was expecting him to say he knows this because his uncle / cousin / other family member is actually the cook at the Dairi Burger! But he doesn't. The point is, they come from different worlds, and his world is, well, weird! Williams writes on page 5: "After all, Manual came from a completely different world. His family was from Mexico and still spoke Spanish at home." We are also informed that, among his distinguishing characteristics, he has a lot of younger sibling he has to care for which is why he seems so mature. His mom makes tortillas from scratch. His home is repeatedly described in way that indicates it's cozy or homey but the subtext is that it's kind of run down and not as nice as the homes of Sandy and her white friends.

Sandy's parent, by the way, really dislike Mexicans. "Those people" are different, Mrs. Bacon tells Sandy when Sandy is trying to tell her about her new boyfriend. Sandy's parents don't want her dating a Mexican guy. What does she do? Of course, she hides this from them. She lies and betrays the person she claims to love. She even almost lets him get in trouble with the law by denying that she knows him. There came a point where I appreciated the Bacons' at least openness about their views on Mexicans. Sandy? I just wanted to slap that girl hard by the time I reached the last few chapters of the book.

Of course, in SVH style, all is resolved in the end. Sandy confesses to her parents. Just as Manuel is about to be arrested on suspicion of tampering with her boat and possibly causing it to explode, she confesses that not only does she know him but she's actually MADE OUT with him AND he didn't tamper with the boat, he saved her life! The Bacons have a change of heart, at least toward this one Mexican. Mr. Bacon even shakes his hand. And they live happily ever after.

Whew! That's a lot of SVH for one post. Part II coming soon!
Posted by All Brown All Around at 2:29 PM No comments: