El Gallito, the Moya Cigar Box and Me

A few months after my son was born, my dear friend Jenna sent me a book titled The Bossy Gallito / El Gallo de Bodas. Written in both Spanish and English it is Lucia M. Gonzalez's retelling of a traditional Cuban tale about a little glutton of a rooster who dirties his beak on his way to his uncle's wedding and then commands a number of animals and objects to do his bidding so that he can make it to the wedding on time. 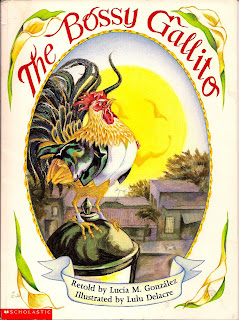 It's a fun tale to read, especially in Spanish because of the tongue twisting and multiple meanings of the words:
El gallito se detuvo y penso:
--Pico o no pico?
Si pico me ensucio el pico
y no podre ir a la boda
de mi tio Perico.
Sin pensarlo dos veces
pico y se ensucio el pico.
I used to read this to E when he was a baby, and then it was tucked away in his bookshelf until this past weekend when I pulled it out and read it to him again. He likes it a lot, and I've been reading it to him everyday since. Sometimes just in English or just in Spanish, and sometimes in both languages.
While I like the tale, it's the illustrations that truly bring me joy. I am in love with those illustrations by Lulu Delacre because they all picture the gallito walking down the streets of Little Havana in Miami (the artist based her illustrations on hundred of photos she took in Little Havana). All the rich details make my heart swell as I think of my childhood home--the little cafetera on the title page; the birds playing dominoes in the park (my father played dominoes in the park every weekend); the cases of pasteles; the steam rising from the flamingo's coffee cup as he stands at the counter of a cafeteria; the palm trees and shopping carts full of coconuts; the Goya can tied to the back of the wedding party's car. Oh, but the one that gets to me most is the one of the cigar boxes and packages in the display case of a cafeteria counter. There I see the package for Padron, the brand my dad smoked (Padron numero 4), and the Moya cigar boxes. 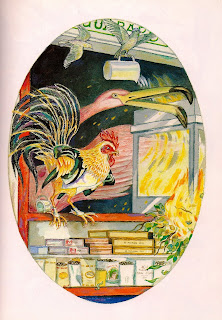 Shortly before I left home for college (to a small town a six hour drive north of Miami) my glasses broke. I arrived at college with broken glasses. They were hideous enough without the addition of the tape holding them together so that my blind-as-a-bat self could function until my new pair arrived. When my dad sent my new pair of glasses, they arrived in my dorm mailbox tucked inside a Moya cigar box. I have held onto this box for almost twenty years. In it are random little keepsakes: graduation tassles; old family photos; the hospital identification bracelet from when I was born; my high school class ring; a bottle of silvery blue nail polish I wore on my wedding day (my something blue); and my father's obituary. 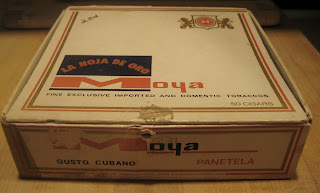