You Can't Be Neutral on a Moving Train 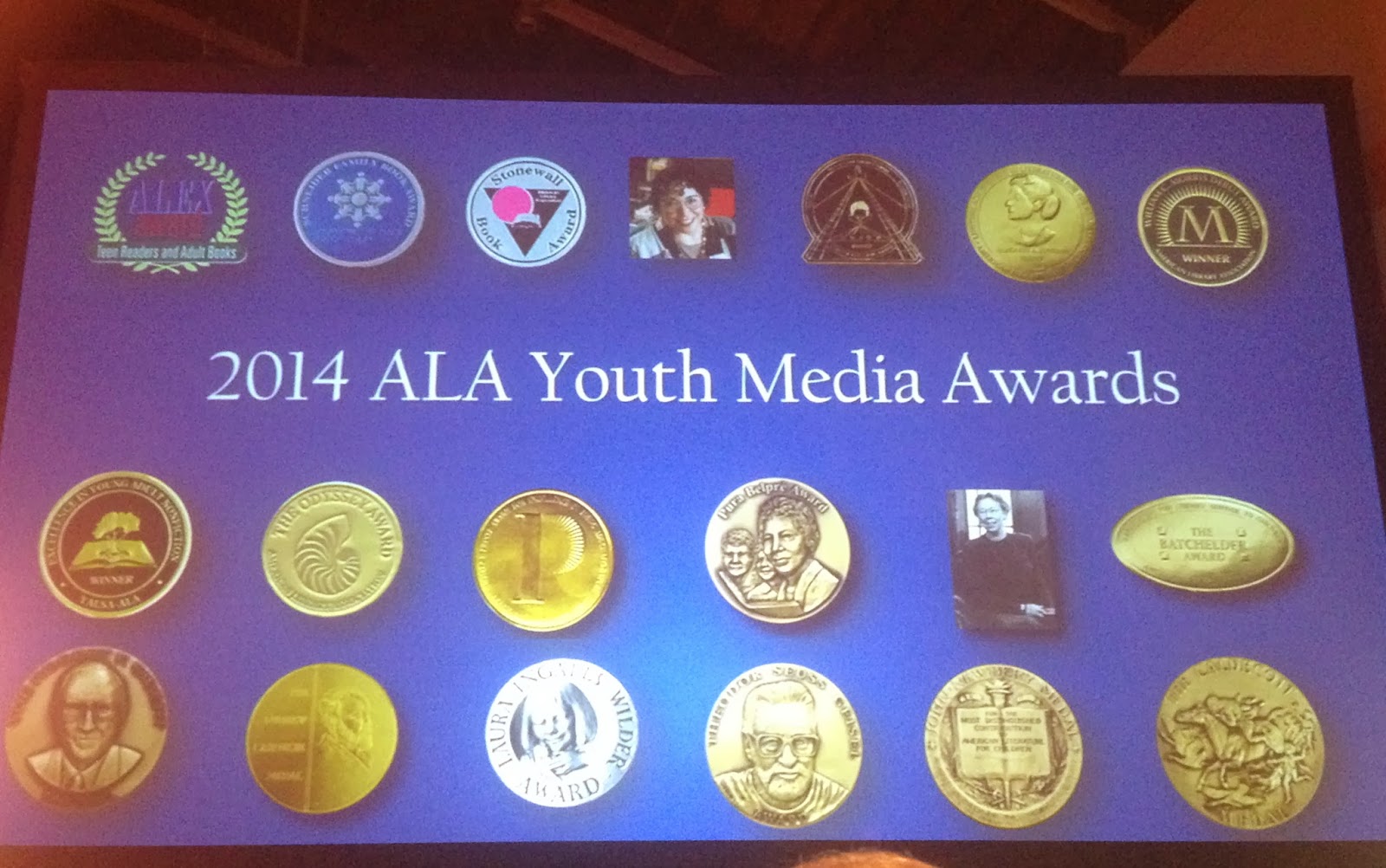 I don't know if that's the best title for this entry, but I like it. Howard Zinn said you can't be neutral on a moving train. I'm thinking about neutrality and award committees. I'll take credit for the Caldecott pun that exists in there somewhere (you know, train, Locomotive). Anyway, this past week the Horn Book Magazine posted a short online article about the Caldecott results, speculating as to why a particular book was not honored at all and inviting others to post their theories in the comments section. The people went off! The people are up in arms about Mr. Tiger's Caldecott snub. Well, I want to vent my outrage too.

The Caldecott and the Newbery each honored four books. One medalist and three honors per award. Not one of those eight books is by or about a person of color. If I'm wrong (and I've been known to be wrong), please call me out. I'm going to drag the Printz Award in here too. I'm doing this for several reasons: (1) Two of this year's Pura Belpré Award honors went to books that fall in that fuzzy age overlap area shared by ALSC and YALSA. (2) The Printz, like the Newbery and Caldecott, also gave four honors. Not one to an author of color or to a book about a protagonist of color. (3) The people (librarians) love them some Printz (just like they love them some Newbery and Caldecott).

Twelve books. None by or about people of color (sidenote: what other term can I use for us besides "poc"? Anyone?) I’m not saying there’s a deliberate conspiracy going on. I mean, obviously there isn't. Books by and about Latinos, African-Americans, Asian-Americans, American Indians and anyone else who is not white (or a zombie / dragon / paranormal hybrid of some sort) are so far off the radar of most librarians and publishers and booksellers and educators they don't even warrant conspiring against.

What goes on in these award committee meetings is top secret. None of us will ever know what went on in the decision-making process so it's easy to speculate. Why aren't artists and writers of color recognized by the Newbery, the Caldecott or the Printz? It's the age-old question. Every year we knock our heads against the wall and bemoan this injustice only to be poo-pooed or to be pretty much ignored. Only two African-Americans (Leo Dillon and Jerry Pinkney) and one Latino (David Diaz) have ever won a Caldecott honor (all three won the medal) in its seventy-six year history. Of these three, only the work of Leo (and his wife, Diane) Dillon had a specific cultural focus. Only one Latina (Margarita Engle) has ever been honored with a Newbery (an honor for The Surrender Tree) in ninety-two years! African-American authors have been recognized about thirteen times, but this number includes both honors and medalists (three) and about half of that number went to works by two authors (Virginia Hamilton and Christopher Paul Curtis). The Printz doesn't have as long a history but is moving in a similar direction.

What does this say? This says to everyone that in the history of these awards that honor the most distinguished in books for children and young adults, only a handful of us have been worthy. When I think about all the amazing Latino illustrators and authors whose books I've read, this just makes me sad. And angry! For neither Niño Wrestles the World nor Yaqui Delgado Wants to Kick Your Ass to have gotten some mention by one of these three awards just seems wrong. I wonder if the Coretta Scott King folks feel as put upon.

It's a lot of pressure on the committee members who take on the responsibility of determining which books are most distinguished. But let's not kid ourselves about a neutrality that exists in this decision-making process. The members of these committees are all humans formed of biases, interests, dislikes, areas of expertise, life experiences. We drag these things around with us in everything we do. To think that we can put on glasses that make us view things in a totally neutral manner is unrealistic. The continued lack of diversity in the selections made by these committees isn't something we can or should ignore. It matters that we talk about it. It matters that white librarians, publishers, booksellers and educators know that we expect more from them.

The Caldecott, Newbery and Printz probably get the most media play of any of the youth media awards. They, along with the Margaret A. Edwards Award, were the only three mentioned in the New York Time's coverage. If you are sitting in the convention center the morning of the youth media award announcements you can hear it. The power and popularity of these three awards among the librarians that fill the room is palpable. These awards mean something to a lot of people. Yes, they're just awards, and no, they aren't just awards.

The question often comes up in these discussions about diversity and awards about the function of awards like the Belpré and the CSK. Some would even suggest that their existence is what keeps books by and about these groups maginalized. The existence of these awards should certainly not make books that fit their criteria left out of consideration for the Newbery or the Caldecott, of course. They serve a different function--to continue to recognize and celebrate our cultures. The fact that they do it when no one else will is a bonus. Or maybe it's the other way around? It would be great if we could do an experiment where these awards aren't given for X number of years, and then see if during that period we see a difference in the number of books by or about people of color that are recognized. I have a sneaking suspicion we wouldn't.

I wonder if one of the issues is that librarians, booksellers and publishers (okay, white librarians, booksellers and publishers) can't get past the cultural element in books about Latinos (or any other non-white group) in order to find the universal message. Is it that they view the only audience for these books as being Latinos? Do they have a difficult time conceiving of a readership for these books that wouldn't see them as just books about Latinos? Does this readership not exist because these books are marketed (by bookstores and in libraries) as books about Latinos, only to be featured during Hispanic Heritage Month? Which came first? The chicken or the egg?

Head over to the Cooperative Children's Book Center listserv where there's a great conversation about multicultural literature going on this month. Also, check out Meg Medina's blog where the Pura Belpré Award winner wrote about this topic as well.

Posted by All Brown All Around at 7:08 PM